During the idea generation and design document creation for DELTA-V, there were a number of different videogames that we looked into for design inspiration as well as ideas for mechanics, thematic elements and artistic concepts. Here I shall go through the major ones and discuss what inspiration we drew from them and how exploring them helped to further the design development of DELTA-V.

Subnautica was one of the first games I looked into during research for this project, dating all the way back to initial word research for my Trepidation and subsequent “pushing through the fear of the unknown” theme. One of the things that most intrigued me about this game was its use of “fear of the unknown”; this idea of hiding things around you by limiting your line of sight with deep, dark oceans and limiting sounds by muffling them to the point of being unrecognisable (i.e. a rock falling a hundred metres beneath you sounds like the roar of a giant sea monster). By massively limiting your senses, Subnautica instills a rather mysterious and ominous tone as well as a great deal of terror, and this feeling was something we really wanted to try and capture for DELTA-V.

Space is a massive unknown, and exploring that dark and mysterious unending cosmos would instill a bit of fear into even the bravest souls. In DELTA-V, space exploration is made tough by its realism – asteroids that could smash into the rocket and kill you, pockets of radiation, gravitational pulls that can pull you way off course – these are all things the player will need to be constantly aware and wary of. The angle of the camera also plays a part in this, as it only shows the player a small section of their surroundings at any one time, meaning that they will need to be constantly on edge if they want to survive their journey and make it safely (or not, depending on the planet) to their destination. These were all aspects of our game designs that stemmed largely from inspiration that came directly from this water-based horror adventure. Diving into (yes, that was deliberate) Subnautica really helped myself and Josh see exactly what the game does that makes the “fear of the unknown” side of it so scary (this idea of limiting senses and making the player constantly on edge primarily) and in doing so the game gave us a great deal of inspiration in terms of thematic and mechanics-based design that subsequently helped form some of the fundamental aspects of DELTA-V as a game.

Kerbal Space Program played a smaller part than Subnautica in inspiring game design ideas, but it still had an important role. Being an incredibly realistic take on outer space travel, researching and then subsequently playing this game not only massively increased my knowledge of how traveling through outer space works (although I confess, I began playing this game years ago – it’s what got me really into outer space) in reality but also really helped in terms of giving me perspective of just how small a rocket ship is in terms of exploring an entire Solar System. The size of the environment in DELTA-V has always been something of a concern (right from day one) and Kerbal Space Program allowed us to get a realistic perspective into exactly how large our environment would be (here’s a clue – very) and how long it would likely take to construct. Orbital mechanics also form a large part of this game, and testing and simply playing around with them here gave us several pointers into how we could get them to work in an actual videogame as well as in two dimensions. We began looking heavily into Kerbal Space right as Phase Three began, and fiddling with the orbital aspects of the game pretty much directly then led to the creation of our best prototype (in my opinion anyway); the NASA Space Game one.

We then circled back around to this game while fully designing DELTA-V in late Phase Three/ early Phase Four, and in particular looking into how the Solar System environment in the game was displayed (see the image above) in the Map. Josh had already briefly designed an idea of what the Solar System in DELTA-V would look like by this point, and so that combined with looking back to Kerbal Space here and seeing its real-time display of orbits as well as planetary designs and specific variables gave us a pretty good idea of how a map or environmental layout should look in our game. This game research as well as my and Josh’s general (and rather expansive!) knowledge of outer space not only helped inspire the specific designs for DELTA-V’s environment (how the planets looked, what was present on each one, how they worked orbitally) but also then led to the creation of the Solar System prototype simulation, which gave us considerable insight into the mechanics behind the full environment of our game.

Terraria played a small role in the much later development of the designs behind DELTA-V, being specifically researched in the later weeks of Phase Four. Being a two dimensional exploration adventure game, I was keen to look into it for both mechanics-based inspiration as well as some general design ideas. During the research and subsequent short playthrough of the game, one thing I particularly liked was how the camera worked. As you can see from the image above, the camera puts the player dead centre in the screen, and allows you to see a great deal of the environment around you – but not so much that you can see everything that might be a threat. I also liked how the terrain appears light on the surface, but then gradually becomes darker and darker the further down it goes, leading eventually into complete blackness.

This aspect of the camera work creates mystery and intrigue, and since that forms a large part of the tone of DELTA-V, I felt it was quite applicable. As a result of this research, the camera designs for Terraria then served as a fair amount of inspiration for the camera positions and movements in the DELTA-V Trailer Prototype, and I felt they worked really well both for helping to get across the “fear of the unknown” aspect of the overall theme as well as showing the player just how small they are in comparison to the world they are standing on (an idea that links back to the Kerbal Space Program research) which subsequently creates a rather interesting mixed mood of both awe and slight dread – as the player is taken aback by how large the world is, then slightly scared by how insignificant they are in comparison. 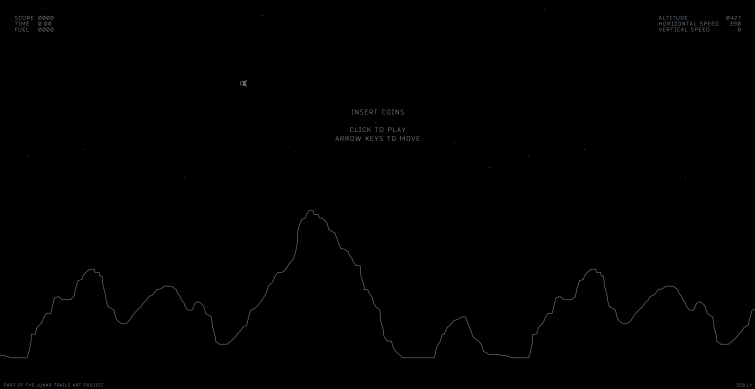 Lunar Lander was a game first suggested to us by our tutor, Adam. It’s a rather simple experience, originally created as an arcade game in 1979. The objective is simple; pilot the “lunar lander” safely down and then subsequently land on the surface of the Moon below. Josh and I played the game numerous times after it was suggested, as well as looking into the developers behind it and the specifics of the major mechanics. At the time, I was particularly interested in the rather minimalist artistic design as well as the simple yet fun (not to mention rather realistic) mechanics behind actually landing the lander. As a result, not only did Lunar Lander serve as the base inspiration for some of the outer space manouevring mechanics in the initial design work for DELTA-V, but it also gave us the initial idea for the major mechanic of the Fuel System.

In Lunar Lander, fuel is an important and rather fundamental element. While playing, you have to keep your eye on it at all times or else you might find yourself running out just as you’re about to make the perfect landing, and all is then lost as your lander crashes onto the terrain below. Josh and I really liked this aspect of the game, and in designing the mechanics of DELTA-V, fuel was something we gave major consideration to as a pretty much direct result of our research into Lunar Lander. In DELTA-V, the player begins with 45.2% Fuel in their rocket, and as the game goes on they must make efforts to conserve it otherwise things will not go well. They can of course refuel using Gas Giants, but they are few and far between, so as a result the player must consider every use of a thruster or vector prediction, as each uses precious Fuel. This mechanic not only keeps the player on edge at all times (inkeeping with the “fear of the unknown” aspect of the overall theme) but also airs on the side of realism (which is another fundamental part of the game) and most importantly it plays a hugely integral role to DELTA-V as a game experience – and this is all thanks to Lunar Lander.

As you can see, research into specific games has played a pretty important part of the idea generation and subsequent design development of DELTA-V. Josh and I already had a pretty expansive knowledge-base of outer space (thanks to our great mutual interest in the subject) but looking into each of these games not only gave us a large amount of inspiration for both thematic elements and mechanic designs, but also massively increased our knowledge of particular aspects of space as well as game design elements that we would otherwise never have thought of. Playing and researching each of these wildly different games was a very informative and educational experience (not to mention rather fun) and in my opinion, DELTA-V is a much more expansive and more interesting game idea as a result.